From Blue Oath
Jump to navigation Jump to search 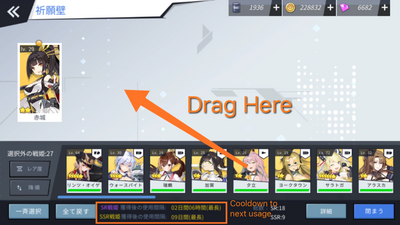 Unlocked after clearing 2-G, the Wishing Wall is where you get Ship duplicates for Limit Breaking. Only SR and SSR Ships are wishable. You will still need to acquire at least 1 of the original Ship before being able to duplicate a Ship. Using wishing wall does not consume any resources at all.

To get a Ship dupe, simply hang her picture on the wall, and press the yellow button, you can put as many portraits as you want for lower cooldown, or put only one portrait to get a guaranteed dupe of that Ship.

The baseline cooldown for getting an SR Ship is 1 days 12 hours, while for SSR it's 6 days 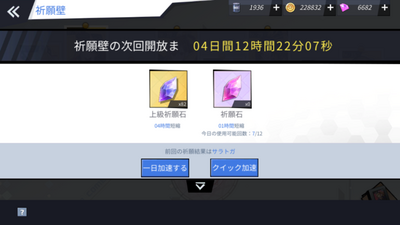 When the Wishing Wall is on cooldown, you can speed up the cooldown process by using purple and pink Wishing Stones.

Blue Wishing Stone reduces the cooldown by 4 hours, Blue Wishing Stones have a ship's name attached to them and can only be used if the ship was the most recently acquired ship from the wall (Acquired from Gacha and events)

Purple Wishing Stone reduces the cooldown by 4 hours, with no limit on usage (Acquired from Gacha, events and stores)

Pink Wishing Stone reduces the cooldown by 1 hour, with a limit of 12 usage in a single day. (Acquired from manufacturing in base, and events)

What this means is, the more Ships you have, the longer overall cooldown before your next available wishing wall usage. It is recommended as a beginner to upgrade their most useful ships while the cooldowns are still low, as they are given plenty of purple and pink crystals for clearing stages. And for the older players to MLB their ships, to reduce overall cooldown for each use.

Retrieved from "https://blueoath.miraheze.org/w/index.php?title=Wishing_Wall&oldid=2116"
Cookies help us deliver our services. By using our services, you agree to our use of cookies.