From Blue Oath
Jump to navigation Jump to search

Daily Stages are the main method to progress, giving you a plethora of powerful upgrade materials, while forcing you to invest in all classes in this game. Despite what the name might suggest, there is no limit to how many times you can run the Daily Stages other than Oil constraints.

For every Stage you clear within the Daily, it unlocks the next level, which is both more difficult but more rewarding. If you have yet to clear a certain level, that level itself will not consume any of the Boost, even if you clear it.

These Daily Stages drop Ship Crystals , which can be exchanged in the Daily Shops (All 4 Classes) for new ships, equipment and Wish Rocks.

After a Stage is fully cleared, it becomes open to farming, you can skip battles with Safe Mode, and the Boss is much easier to kill with no gimmicks

- It is currently the best oil to EXP ratio as regular stages gives next to no EXP for ships.

- Early BB8 clearing strategy requires a West Virginia, which is obtainable as a drop from 5-4. West Virginia has a skill that will attract all the salvo towards her, meaning she will be the only one to take damage instead of the whole team and if you have a Queen Elizabeth/North Carolina, will target them instead due to their skills that protects 1 allied ship and reduces their damage taken. This leaves you with more ships at full health that can do full damage. Do note that Battleships/Battlecruisers are prone to overkilling enemies due to their high firepower and low reload, so it takes a bit of luck to clear. Samuel can replace West Virginia in BB7, but not BB8 as she is a Destroyer.

- Due to how many token and chips needed to upgrade an equipment, and the way the spread out drops work, it is not recommended to farm this stage outside of the daily drop boost.

- Early DD8 clearing strategy requires a Samuel, or Glowworm + McCall, and SR +15 torpedoes. Samuel is a Gacha only SSR, while Glowworm and McCall are available from construction (Recipe is 30/30/30). Samuel works the same way as West Virginia as she will bait all the boss damage onto herself, leaving you with only 1 damaged boat. The other Alternative Glowworm and McCall needs sufficient skill level and speed to pull off, requiring you to get into close range before the boss can fire her first damaging salvo, McCall will give you the required time to close in due to her night skill, while Glowworm blue skill will disable the boss salvo for a few seconds. Enough time to unload all your torpedoes to kill the boss. 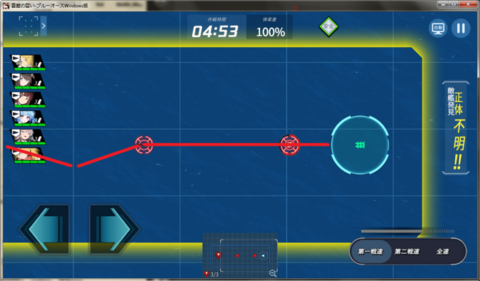 - Later levels will have island barriers that prevents entering combat, making airstrikes the only way to damage the enemy.

- Due to how many books are required to level a skill, it is not recommended to farm this stage outside of the daily drop boost.

- Early CV8 clear is arguably the easiest daily to clear, as it only requires good planes and hangar, preferably SR +15 as it is not a steep investment. the map itself only allows for airstrikes and has airstrike cooldown refresh orbs scattered around the map, Ff the hangars are insufficient, then airstrikes will deal reduced damage due to insufficient planes.

- There are 2 ways to clear CV8, first is defeating the Northeast enemy from the location of spawn by airstrikes to open the path to the boss, requiring only to defeat 2 enemies in total.

- The other way is to set resolution to 2:1, 1800:900 for example, this will force the game to zoom out on the overworld map, barely showing the boss on the edge of the screen, where you can airstrike it and clear the stage by defeating only the boss without wasting time on the other enemies.

- Later levels will have respawning enemies, you will need to defeat all enemies within a short timeframe to win.

- Most recommended daily for no boost clear, as it gives ship crystal along with the chance of getting good equipment. Recommended for newer player and veterans alike to collect enough SR/SSR equipments to gear up mubo gauntlet fleets.

- Recommended ships for early CL/CA8 Clear : 1-3 strong DPS ships while the others become sacrificial ships for the greater good.

- Early CL/CA8 clear is very straightforward, enemies will respawn after a few seconds when you sink them, the only way to clear is to sink all the enemies in a short timeframe. It is recommended to sink one enemy by salvo and then use torpedoes for the other one for the regular battles.

- For the boss battle, the boss will spawn with 1 mob that will direct all salvo fire to it. The boss has a magnet salvo that will take either 1 to 4 ship into red depending on how it hits, you will want to retry until the boss doesn't damage your main DPS ships and only damage 1-3 ships. After surviving the boss first salvo, unload everything in your arsenal and damage the boss as much as possible to reduce her second magnet salvo damage to manageable levels. Do note that the mob will respawn and bait all salvo fire to it again if enough time passes.

- Some notable cruisers that works best in the stage :

Haguro, carries enough DPS by herself due to her torpedo reload skill.

Prinz Eugen + Norfolk + Dorsetshire, resets their salvo cooldown when they kill an enemy, on this stage, it means they can instantly fire at the boss after sinking the mob, and if they are strong enough, will damage the boss enough to lessen the boss salvo damage to your fleet.

Admiral Scheer and San Francisco, can fire salvo from long range, making them fire alone and if they are strong enough, will take down the mob by themselves, saving 5 of your ship salvo for the boss.

Algerie, Reduces boss damage by her skill, preferably after killing the mob and trigger her secondary before the boss fires her first salvo. 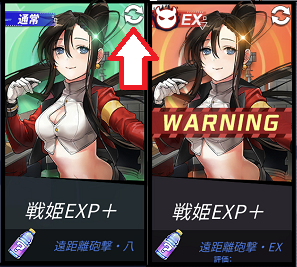 EX Mode for each daily is unlocked after clearing level 8 of the particular daily, and can be accessed by pressing the circle on the upper right of the daily category icon.

EX Mode allows the player to choose various buffs for the enemy fleet. Each buff applied awards the player with a ★ upon completing the daily, with rewards at 4★, 8★, 12★, 16★, 20★, 24★ in addition to the regular daily rewards. Buffs can be removed after completion, with subsequent runs giving the rewards for the highest ★ level cleared. Note that the buffs are not completion-based (i.e. if a daily is completed with only buff A and completed again with only buff B, the daily will only have a 1★ clear rating; completing it with buffs A+B will yield 2★)

In addition to the effects written on the buff, each buff applied will also increase the enemy fleet's HP and damage by 10% (+60%/+60% when all 6 buffs are applied)

Retrieved from "https://blueoath.miraheze.org/w/index.php?title=Daily_Stages&oldid=1490"
Cookies help us deliver our services. By using our services, you agree to our use of cookies.